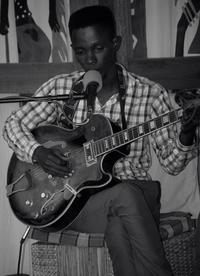 Kamikiwe Yves is a Musician Independant Artivist based in Bujumbura, Burundi.

Guitarist, he has already released two Albums SAMANDARI and UMWANYA

Beside, he gives consultancies with NGOs by composing awareness songs as part of the Command Music, he carries out awareness tours in several provinces of Burundi through community animation concerts.

Yves KAMI is a Burundian artist. He is originally from Mwaro, in the interior of the country. Since 2007, he evolves on an afro-blues style. Its difference? He is inspired by Burundian musical poetry and punctuates his creations with the royal Burundian drums.

At the national level, he has increased his appearances in concerts and festivals: Amahoro and Inanga Festivals, Buja Sans Tabou, Alliance francaise de Gitega, Institut francais, Concert de La Francophonie, University of Burundi ... He also works with NGOs especially on commissioned songs or during workshops with the children.

He is appointed Ambassador of the African Artist Peace Initiative in Ethiopia and participates in major events in the Region (Doadoa East African Performing Arts Market- Uganda, 2018 (Ongala Festival - Tanzania, 2018) Sail and Sound in Zanzibar, two concerts in Tanzania 2020 (at Nafasi Arts Space and Alliance Francaise Dar Es Salaam with Noumoucounda from Senegal and a concert at Lonely Hearts Club in Johannesburg South Africa 2021